Piapro Studio was created to allow the developers to expand their VOCALOID characters in new directions that VOCALOID limited within its software. It was originally sold as an alternative to supplying the full VOCALOID software and was first released with KAITO and the "KAITO V3" software. The first few versions had a form of the VOCALOID API at its core synthesizing process. The software was fully compatible with Studio One, a Digital Audio Workstation created by Presonus.

As it had the VOCALOID API eventually it was able to open up to allow all other VOCALOID from VOCALOID2, VOCALOID3 and from Piapro Studio for v4x onwards, VOCALOID4 vocals to be loaded. However, originally it was only made for Crypton Future Media Vocaloids.

In the second version, Piapro Studio for v4x, E.V.E.C. was introduced. This new function was exclusive to specific voicebanks for Hatsune Miku, Megurine Luka and Kagamine Rin & Len for their "V4X" releases.

As of August 31st, 2019, the software has departed from using VOCALOID and is its own independent software.[1][2] 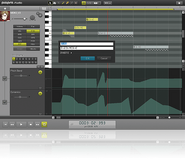